THIS SITE AND YOUTUBE CHANNEL ARE UNDER CONSTRUCTION.
Songs, photos, films all going up over the next few weeks. Estimate about 10th May most will be up here.

Life After Drumming? Maybe. I am Mick Barratt and I started this new channel as my first ever foray on the web on Easter Sunday 2019. I am in a hurry - the question mark ending the first sentence is real. I may be facing the death sentence.

(Technically 'I' am not Mick as in fact this is a neighbour setting this up - generally helping the last few months capture as much of Mick as possible like a  scribe following behind the king as he pronounces. far more fun was building for Mick the 'studio' in an outbuilding -  loadsa eggboxes and carpet to cover the walls to keep the rather good racket in)

I would like to be called Life After Drumming rather than Mick -  rapido, as i need to get my brand working. I was going to call it 'dead man walking' but many already use that handle. Perhaps this is more apt.

I was for over a decade a part time professional drummer in a band called Gaffa - back in the day....
A bit of a history of Gaffa is available here http://yetiboyrecords.com/gaffa
and bellying the usual jokes about drummers i decided a few years ago to learn to be the rest of the band. Excepting bass which i leave to my trusty old mate Wayne Evans who occasionally comes to visit me in my home in The Marches.

I sing songs i write myself - have been doodling my thoughts for years. But only to myself - i have had no involvement in the music biz for the last  decade as i changed region and knew few musical folk to link up with. And three years ago decided to learn the guitar - for my sixtieth birthday Gaffa bandmembers gave me one as a present. . For the last three years i have been imposing upon Stuart my little dog, and the neighbours, with tortuous training. A few months ago i was 'ready' to try and do something with it. So using an old tascam 4 track cassette recorder and mixer it was time to become home studio ... 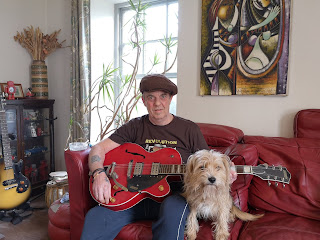 Update January 2020
This blogpost  - what appears above, was started in early spring 2019 as i planned to go full speed ahead developing an online presence for new material i write. Then rather a lot happened to keep me away from music..... The story will be written soon and some film uploaded which perhaps may be interesting for some - especially those facing the nasties life can throw.

Posted by Life After Drumming at 22:20 No comments: